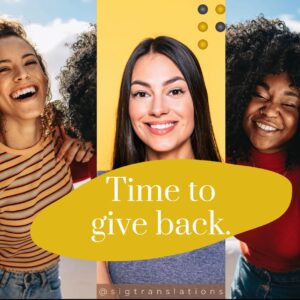 Part 2 of our blog about language, communities and trivia looks at how different languages bring communities together, but also can find themselves under threat as a result.

Numerous words, of course, are borrowed and absorbed from other languages into the native lexicon (and not just English), reflecting sometimes centuries of common trade, culture, migration, communities and so on. In Spanish, for example, approximately 4,000 Arabic words are in regular use, underlining the proximity of southern Spain to North Africa. In the cosmopolitan London of today, it may surprise you to know that around 300 different languages are spoken. It is a common scenario that in a typical primary school class, pupils who have English as their first language are in the minority.

But languages do not always mean words. In some remote parts of Spain and Greece, whistling with its various intonations and pitches has in past times been the main means of communication. Such an ingenious method of chatting with a neighbour on the other side of the valley is surely disappearing, however, as offspring leave home (armed with a mobile phone, I daresay) to seek their fortune in the city rather than living the simple but hard life in the isolated mountain hideaways of their shepherding ancestors.

There are over a quarter of a million English words, with approximately a dozen new words added to the dictionary every day. The word “run” has over 600 meanings in its various forms. So, it’s a job to keep up sometimes.

Let’s cross the pond. What’s the official language of the USA? English? Spanish? In actual fact, there is no official language! Incredible, isn’t it? In Italy, the official language is Florentine. Perhaps more remarkably, in 1974, in Central America, in Nicaragua, deaf children created their own sign language. In South America, in Argentina, believe it or not, Welsh is still spoken in some communities. Welsh? In Argentina? What? In 1865, 153 Welsh immigrants left their motherland with the express purpose of settling in a new country where they could protect and promote their native Welsh culture and language, which was  under threat back home. After an arduous journey of several weeks over the Atlantic, they settled in the desolate Chubut Valley, living at first in caves. Over time, although the use of Welsh decreased, it failed to die out. In more recent times, interest in Welsh and Welsh culture has dramatically revived in the region. In 1945 and 1946, the BBC World Service broadcast radio shows in Patagonian Welsh. Welsh visitor numbers have also increased. In 2004, Welsh speakers in Argentina asked the Welsh government to provide them with Welsh TV programmes to encourage the survival and growth of Welsh in Patagonia. Patagonian Welsh has inevitably developed to be a distinct dialect of Welsh, different from the several dialects used in Wales itself, but speakers from Wales and Patagonia are able to communicate readily. In 2016 there were three bilingual Welsh–Spanish primary schools in Patagonia.

Welsh, of course, is a Celtic language. In this family we can include offshoots of the original tongue in Irish, the Gaelic of Scotland, the Breton of France, along with Cornish and Manx (of the Isle of Man). Dolly Pentreath of Mousehole (pronounced Muzzle) is believed to be the last native speaker of the ancient Cornish Language in the far southwest of England. She died in 1777.

A Welsh friend of mine once told me that many years ago she took her young Welsh-speaking daughters to Brittany in France for a holiday. The little girls were left to play within their mum’s gaze and started chatting animatedly to a local lady. When the youngsters ran back to their mother, she asked them how they had communicated with the French woman and what they were chatting about. The girls replied that the conversation was in Welsh and that they were talking about seaweed. In actual fact, unbeknownst to the girls, the lady had been speaking in Breton and the three of them had happily conversed with ease.

Some languages do not evolve as quickly as others. In Pennsylvania, USA, the highly traditional Anabaptist Amish community (stemming from German immigration in the early 1700s) speaks Pennsylvanian Dutch, a variety of West Central German. Their lifestyle of sparse simplicity and tradition has helped to slow down its evolution.

How languages reflect each other, diverge or self-absorb is a source of endless fascination. We often hear the phrase “pidgin English” when referring to those who have just a very basic smattering of words with which to communicate. But let’s take this a step further. When pidgin evolves and becomes the dominant first language, the new established language is known as a creole language – or creole for short. Examples of English creole are found in the Bahamas, Fiji and St Kitts. There are also many examples of French, Portuguese, Dutch, German and Arabic creole.

Language is all about communities. So join our community! Maybe you’d like to offer a free presentation session to discuss your field or experiences, or perhaps you represent a university and would like to promote your language courses for potential students through us. However you’d like to participate, we’d love to hear from you.