Language, Communities and Trivia – Part I 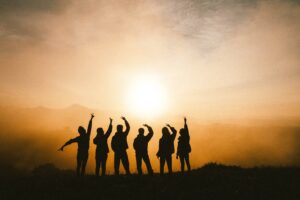 Say It Global Translations is working hard to be a community of linguists, professionals, language students, experts and language lovers from all over the world, who can be part of a safe language community hub with access to talks, resources, learning tools, work projects and a “language lounge”, where anybody can collaborate and share ideas and opinions about the language industry in general. Only through a close-knit but expanding community can the linguistic world grow stronger, where, for example, the translator who works long hours on their own can feel part of a supportive and social community group and share, learn, network and be supported by a friendly hub of like-minded people. Our community will offer you the platform also to write blogs and articles for our website and to engage with fellow linguists.

This week’s blog reflects this idea of communities – how languages grow and develop amongst communities and social groups – amongst other linguistic snippets to make you marvel. And just as languages evolve, so we hope the Say It Global community hub will grow too.

As a language lover, are you the type of person who lies awake at night wondering when the phrase “A dog is a man’s best friend” was first coined? Then maybe we can help to soothe your troubled mind and give you the keys to a treasure chest of language trivia to help you go to sleep. It’s surely better than taking a sleeping tablet.

Allegedly “A dog is a man’s best friend” was uttered by Frederick the Great of Prussia in the late 1700s. On the subject of animals, you may like to know that “The quick brown fox jumps over the lazy dog” is an example of a pangram (“pan” meaning “every” and “gram” – short for gramma – meaning  “letter” in Greek). So, a pangram is a sentence which uses every letter of the alphabet. Maybe YOU know of a pangram in your native language? If so, do tell us. We are all ears. And now that you understand the meaning of the word “pan”, you will inevitably see this stem everywhere to the point of infuriation. Pandemic. Panorama. Panoply. One word has been on one heck of a journey. The massive influence of Greek on much of English vocabulary today is hardly surprising, for Greek with its alphabet (alpha, beta – see?) has scarcely changed form in almost 3,000 years, since the time of the poets Homer and Hesiod.

The  evolution of language is constant and unstoppable. It is not always a good thing, as we have seen. Think how often people confuse “bought” and “brought”. Maybe one day these forms will be interchangeable! And we can but wish that the propensity to use redundant filler words such as “like”, “actually” and “basically” will die out and become just a quiz question. So, what are such words called? The answer is “crutch words”.

Language is all about communities. So join us on our journey to build a language community hub: presentations, networking, learning resources, advice, writing opportunities, work, mutual support and work.