Without knowing it, most people use many established sayings in their everyday chat without ever having considered the meaning or origin of such phrases. Many can be traced back in the mists of time to medieval England or to particular people or events. Their semantic journey may have altered the original definition, but language and vocabulary evolves inevitably and constantly. In fact, many English words have their roots in the ancient past, going back over two thousand years or more – from Ancient Greece, the Roman Empire and the occupation of Britain in the first century AD, and afterwards, of course, from the invasions of tribes and armies from Northern Europe and Scandinavia. Later, with Britain building its empire across the world, new words were introduced from countries such as India (such as chutney, karma, pyjamas) and the Caribbean (hammock, barbecue, potato amongst others). 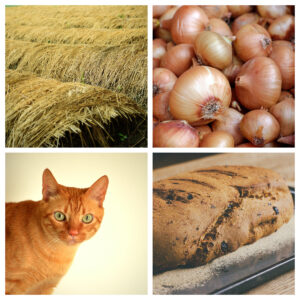 To understand a language fully is a journey through many hundreds of years of social and political history, a peek into the long-disappeared worlds of craftsmen, poor folk, rich landowners, customs and traditions, politics, royalty and much more. English is a melting pot of all these things.

So next time you get dressed to the nines for a special evening, or your ears are burning when you hear two ladies at the bus stop talking about their husbands, or you catch your child red-handed eating YOUR birthday chocolates, just remember that you are part of an endless semantic journey that started over 2,000 years ago.

Here are a dozen of our favourites…

1. To eat humble pie – to admit, with a hint of embarrassment, that you are wrong

700 years ago, when hunting was a popular activity and an essential source of food, the dead animal in question (maybe a deer or a wild boar) would be cooked and eaten by the landowner and his subjects. Those of the highest social class naturally enjoyed the best cuts of meat, but the peasants would merely be given the numbles (the heart, liver and entrails). Over the years, the word numbles became ‘umbles which were cooked in a pie. You knew who the lowest social class of folk were because they would eat ‘umble pie and thus feel rather humiliated. So stick that in your pipe and smoke it!

2. Burning ears – my ears are burning when someone is being talked about

3. To let the cat out of the bag – when a secret is (often inadvertently) revealed

In the 1500s, unscrupulous farmers would go to market and stuff a poor cat in a bag instead of a piglet. If someone then let the cat out of the bag, this brazen trick was uncovered. Thus the phrase came to mean revealing an often bad secret or plan. I don’t know what happened to the farmer, though…

4. To bring home the bacon – when someone who is considered rather wealthy and can provide

In medieval times, if you were occasionally in a position to add pork or meat to the normally dull meal of vegetables and yucky gruel, it meant you had come into a bit of money (or luck) and were able to afford bacon, which would make the family dinner a little more appetising. You’d bring home the bacon. I once bought only a pack of Danish rashers in the supermarket and said to my daughter at the till, “I’m bringing home the bacon.” She thought I was nuts.

5. To be caught red-handed – to be caught in the act of doing something wrong

This dates back to 15thC Scotland, when the term referred to an English law which determined that anyone who killed an animal not belonging to him/her would be punished. Proof of the crime was that they were caught with the animal’s blood still on their hands. Maybe they should have carried some loch water on their person to wash away the evidence.

6. To be piss poor/a piss-poor show – to be extremely poor/a really bad performance or service

Er, sorry about this one, but it’s in common parlance. Poor people used to keep their urine in a pot which was then sold to a tanner to tan animal skin (to treat the leather). If you had to do this to make a few pennies, you were considered very poor – or piss poor. If you “don’t have a pot to piss in”, then you’re penniless. Don’t get caught out in a motorway jam, will you? Whatever would your fellow road users think?

7. The upper crust – the upper class

In the old days, which part of a loaf of bread you were given to eat depended on your status. It may have been a dinner party for all, but labourers had to make do with the burnt bottom of the loaf, while family got the middle section, and the wealthier guests enjoyed the top part of the loaf – the upper crust. Thus the upper crust came to mean the wealthy upper classes. Which reminds me, I really fancy a baguette from my local Upper Crust.

8. To bury the hatchet – to agree to end hostilities

In the 17th century, when the English Puritans were trying to establish their new lives in North America, they had the Native Americans to deal with. Luckily, in this case, diplomacy won the day and the local tribes agreed to bury their hatchets (axes) and other weapons and live in peaceful harmony – for the time being.

9. To chew the fat – to sit back, natter and chat about things

Fat from the meat would be cut up and divided amongst people sitting around the pot. They would then chew on this while chatting about the day’s events. Another olive, anyone?

10. Threshold – the entrance to someone’s house/to be on the edge of something

In medieval times, rich people would have slate floors, which became slippery after a good old English rainstorm. To offset this problem, they would put straw (known as thresh) on the floor. When it reached the door itself, a piece of wood was placed to hold the straw in place. This became known as the thresh hold. To be on the threshold of something means to be on the very edge of something. For example, England were on the threshold of winning Euro 2021. They really should have brought on Jack Grealish earlier, in my humble opinion. Maybe I’ll just go and listen to the lovely “On The Threshold Of A Dream by the Moody Blues instead….

11. To throw someone to the lions – to put someone in a very dangerous and helpless situation

In Ancient Rome, Christians and others who protested against the political system were literally thrown to the lions and mauled to death. Thank goodness for the Emperor Constantine, who converted to Christianity and issued an order from his deathbed in 337AD that all Christains be protected.